Clairo is a fictional app that helps users set financial goals and accomplish them by automatically putting away spare change and turning daily spending into savings.

SEE IT IN ACTION

HOW I GOT THERE

In April of 2021 hell broke loose in Colombia. Strikes triggered by an unpopular tax reform and fuelled by massive inequality put the country on hold.

Amid the chaos, I reflected on the many social issues the pandemic heightened. Financial insecurity was one of them.

Financial security can be improved through education and plays a role in achieving higher levels of equality, however, it's given little to no importance in academic curricula for young children all around the globe.

For this reason, I set out to design an experience to help users gain more financial freedom through knowledge.

WHY IS THIS PROBLEM IMPORTANT?

Because financial literacy is correlated with financial health. When you don’t have the knowledge to navigate the financial system, you can easily end up bankrupted early in life.

Or delaying and even reconsidering important decisions such as deciding to pursue higher education or purchasing your first house.

Which ultimetely has a big effect on a nation's economy and growth.

WHOSE PROBLEM WAS I SOLVING?

They are now more likely to have a college degree than men and participate actively in the labor market, yet their level of financial literacy remains very low. 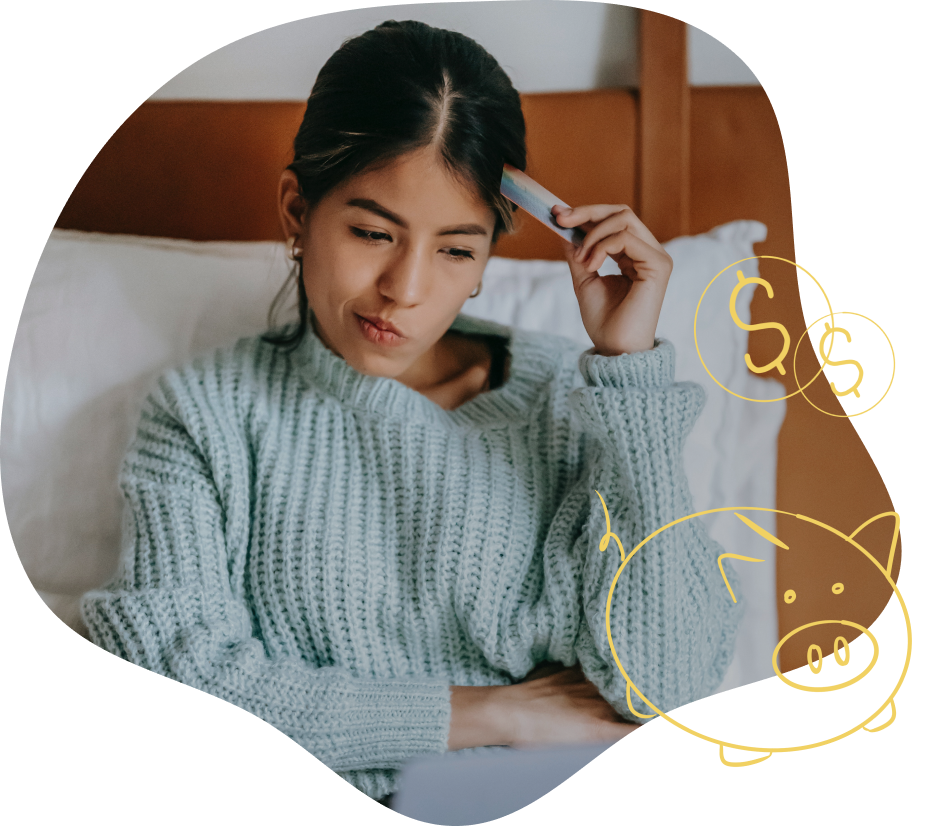 USING RESEARCH TO HELP GIVE CLARITY AND FOCUS TO MY SOLUTION

Through a series of google searches, I tried to understand what a financially literate person is and why it’s difficult to become one.

A person is considered financially literate when they know how to earn money, budget, pay off debt, save, invest and protect themselves financially

I looked at potential competitors of this product to understand how they tackle teaching financial skills.

I learned that direct competitors are mostly content apps, targeted at children, that ran out of value pretty quickly.

As for the indirect competitors, they are mostly targeted to an older audience but focus solely in teaching users about investment and overlook basic financial concepts such as saving and budgeting. 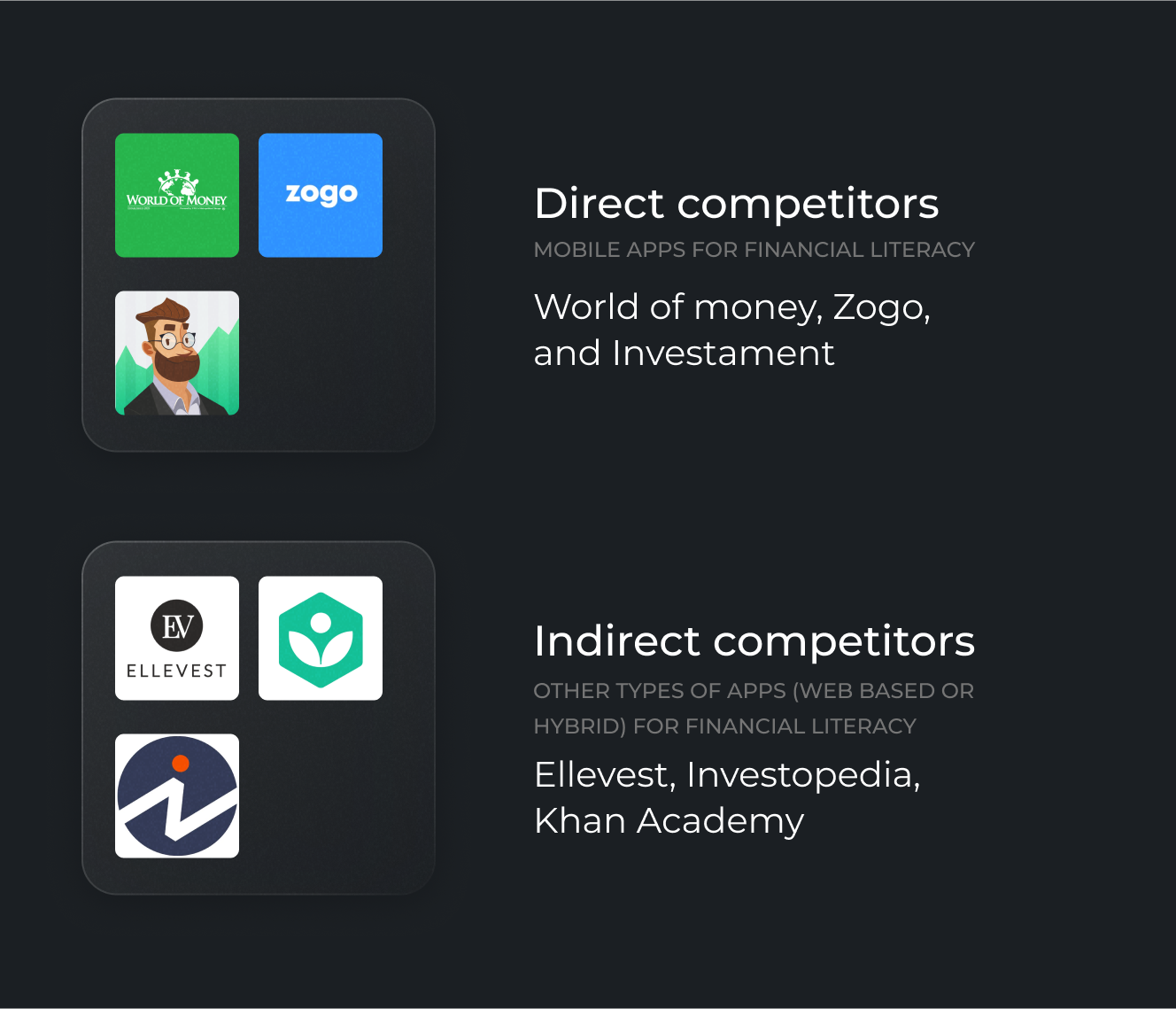 I investigated people's money habits, as well as the perception they have about their own ability to make financial decisions.

I conducted five in-depth interviews lasting around 1 hour with women that are 30 years old and then summarized my findings into an affinity map.

Users go through a whole lot of problems restricting themselves from spending their savings. 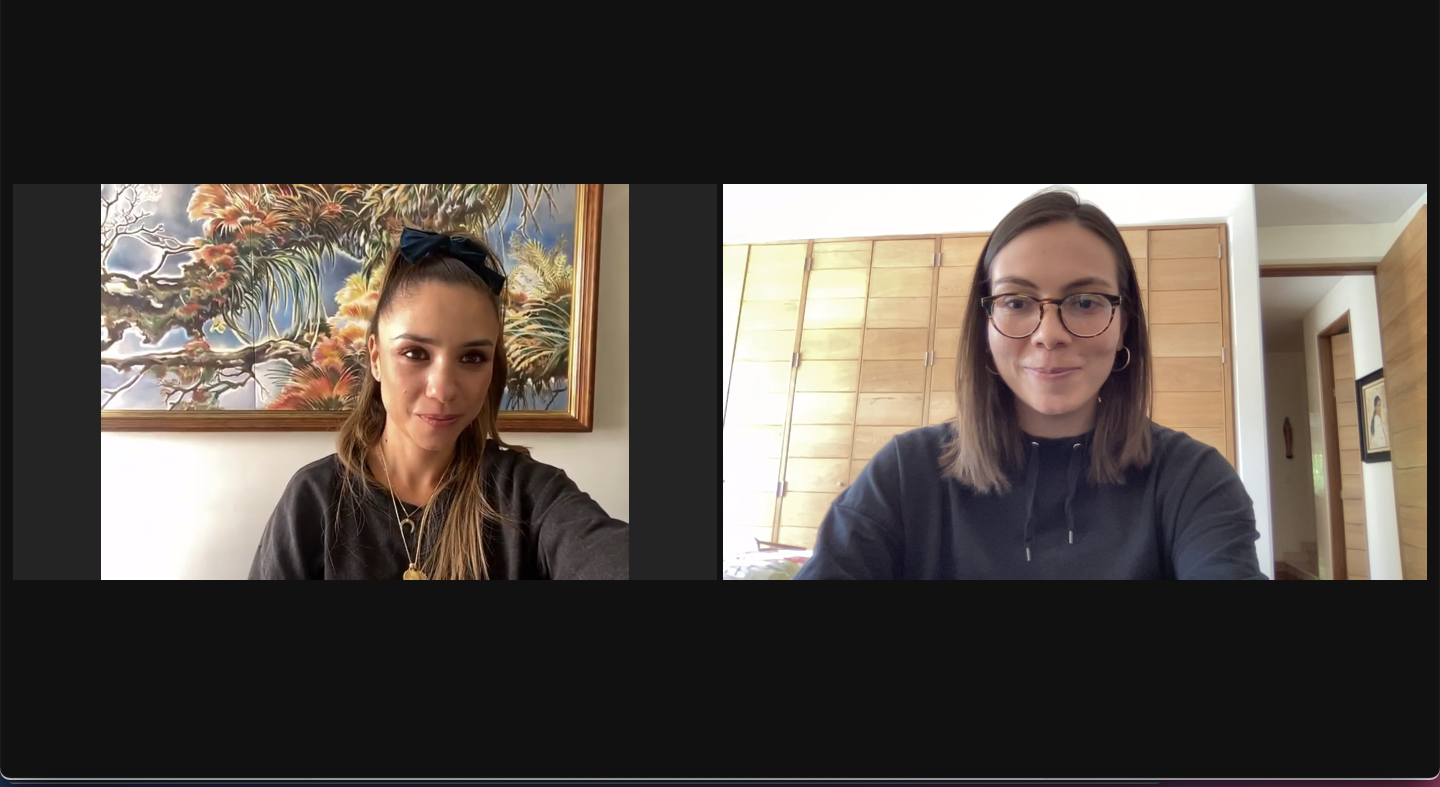 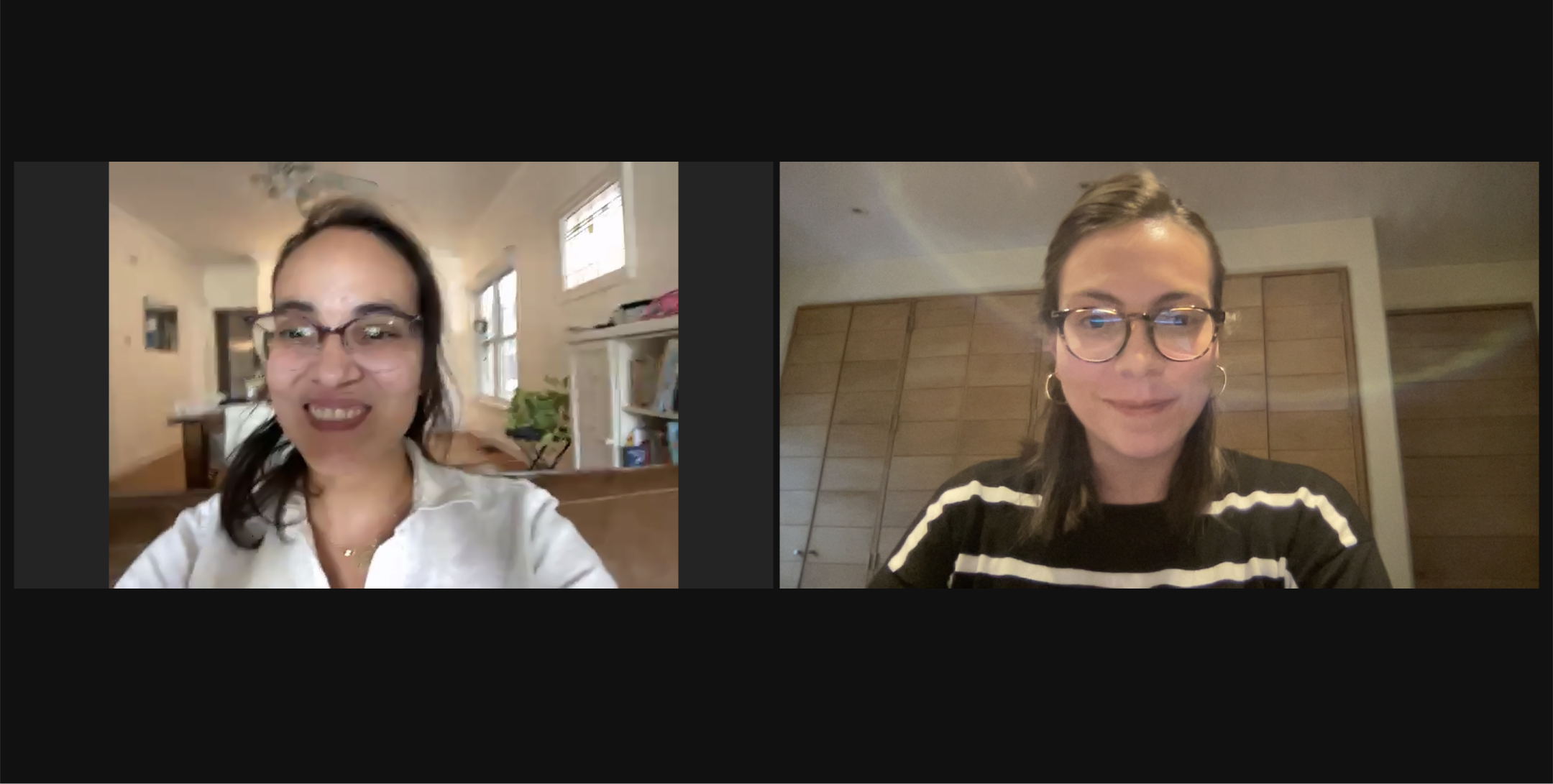 “I withdraw my savings and put them in an empty wallet I hide at home. But it’s useless, I know the money is there and end up spending it” 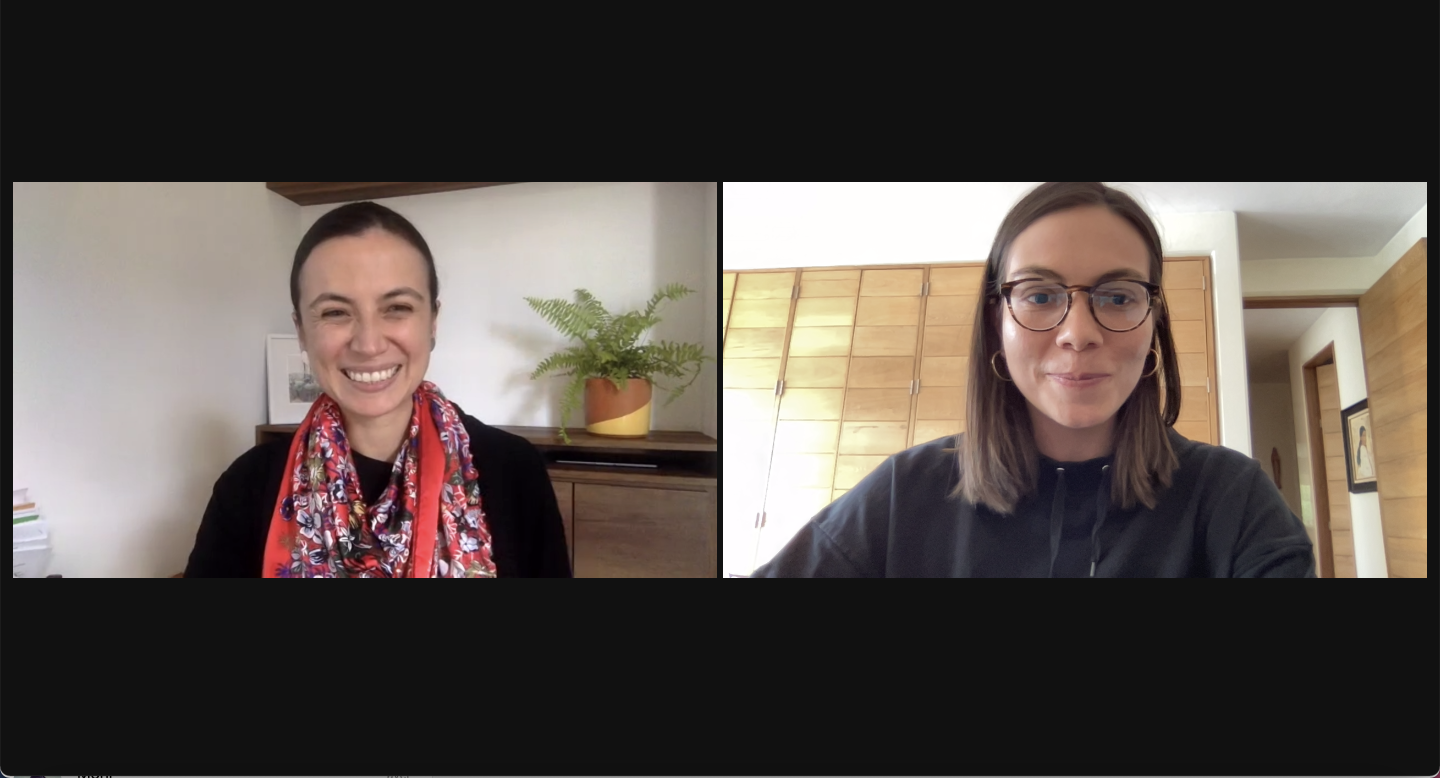 “I wish there were financial products that would recommend how to spend your money. Like advice you on how much to save, how much to spend and so on. “

Women think of their financial goals in terms of lifestyle instead of numercially.

This was also backed up during my competitors analysis through the examination of Ellevest, a robo advisor targeted at women.

Habits that are important to achieve financial health are considered tedious and avoided at all costs such as creating a budget.

To set the stage for the ideation part I decided to focus on the coming up with ideas to resolve these questions:

How might we show users if they can afford the lifestyle they aspire to have?

How might we help our users avoid spending their savings?

SKETCHING AND ITERATING TO COME UP WITH A SOLUTION

I started my ideation process by following a crazy 8’s exercise. My strongest ideas were then converted into low fidelity wireframes to test out the user’s flow. 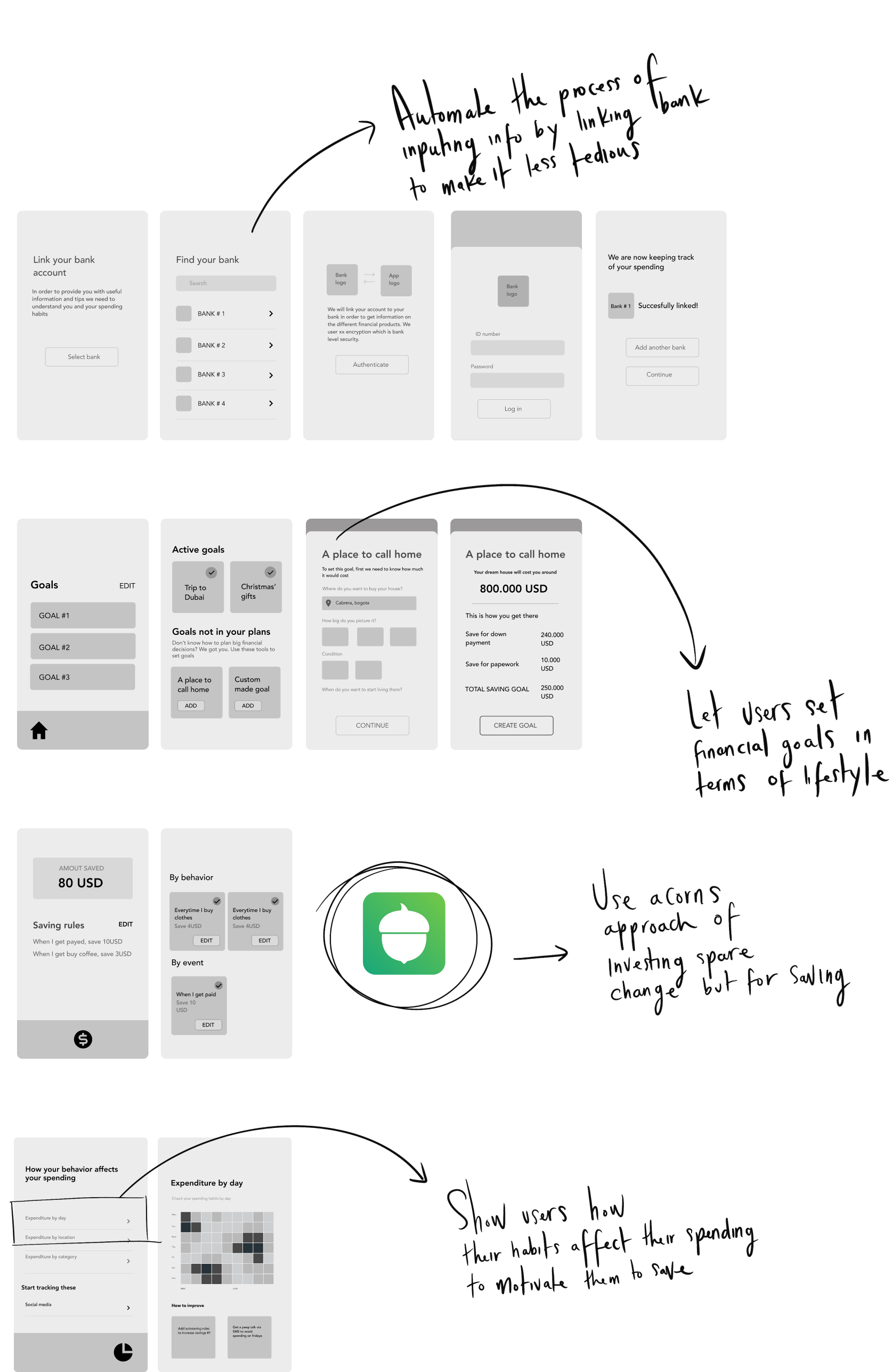 CREATING A BRAND THAT COMMUNICATES EASE AND HOPEFULNESS

Progress, as communicated by the apple watch activity monitor

TRANSLATING SKETCHES INTO A PROTOTYPE 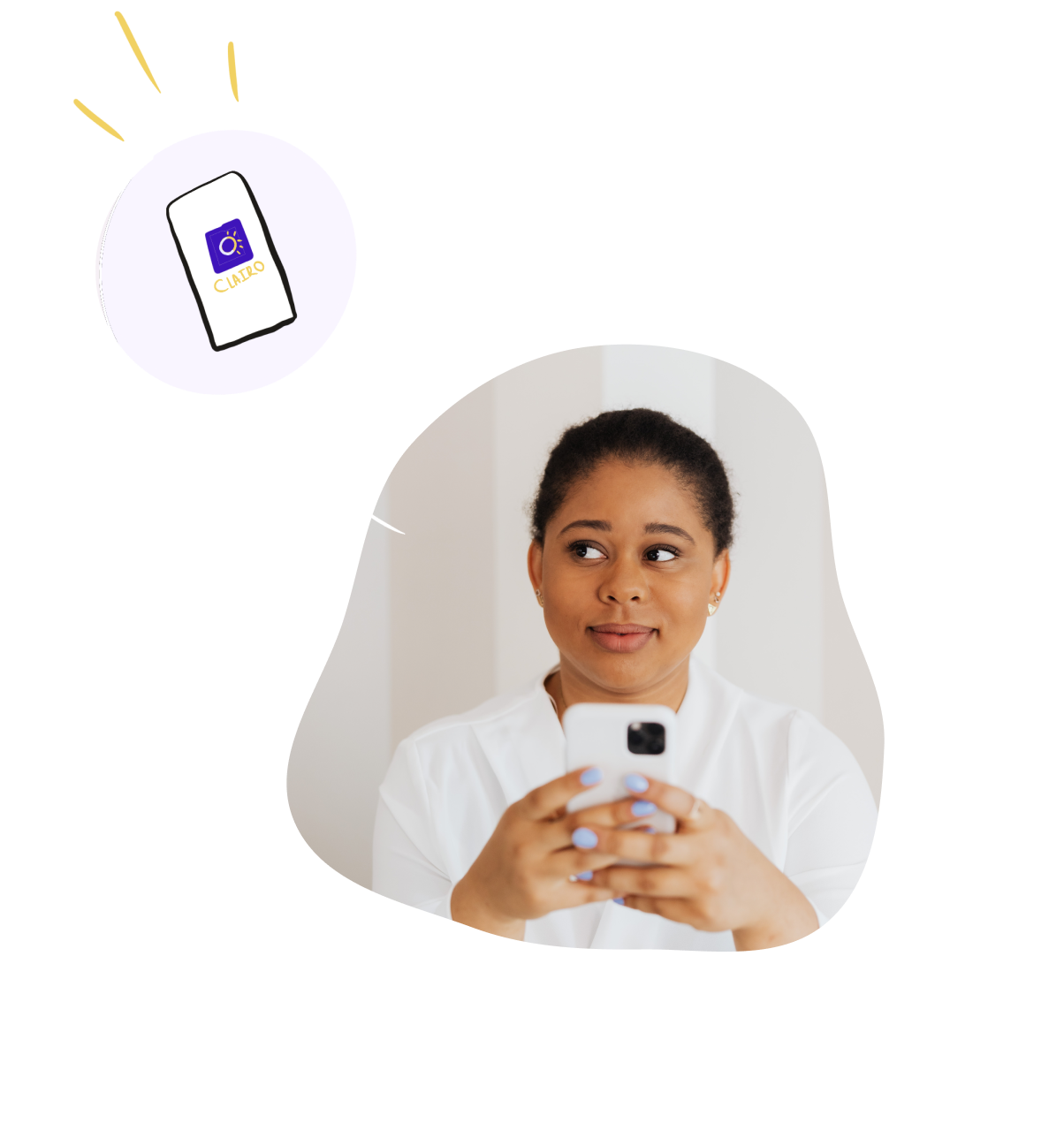 DEFINING WHICH INTERACTIONS TO TEST

Given the scope of this project, I focused on creating a set of mid fidelity wireframes for two user flows that I considered to be the main differentiators of the product.

Step 1: User clicks on the goal

Step 2: User clicks on ‘edit’ in front of auto-savings

VERSION ONE AND TWO

Before getting to my final design, I iterated on multiple versions using different color palettes. For each version, I did some light testing to get feedback from other designers, and users to understand how the design was being received. These versions didn't make it to the final design, but they helped me find the right path. 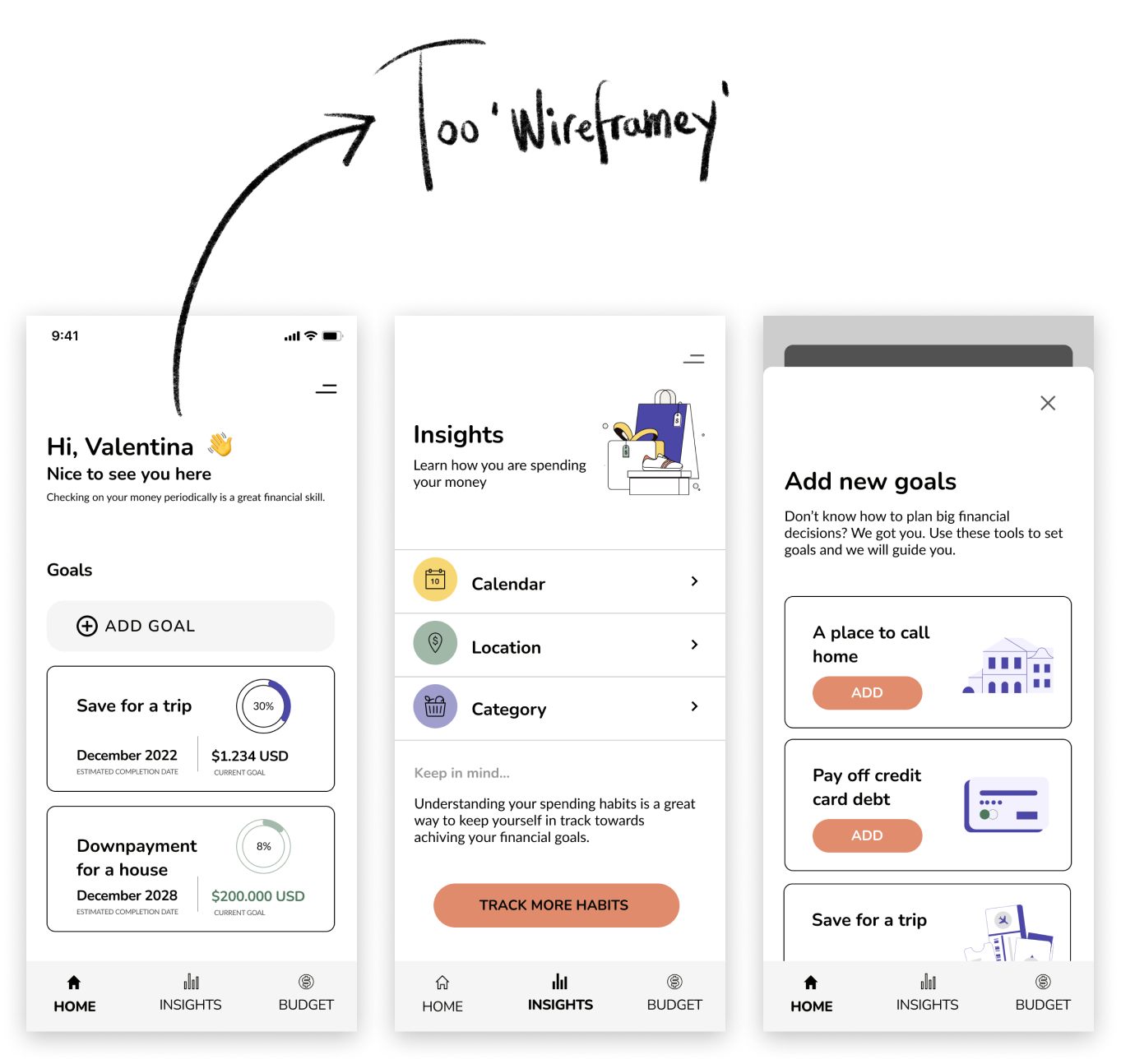 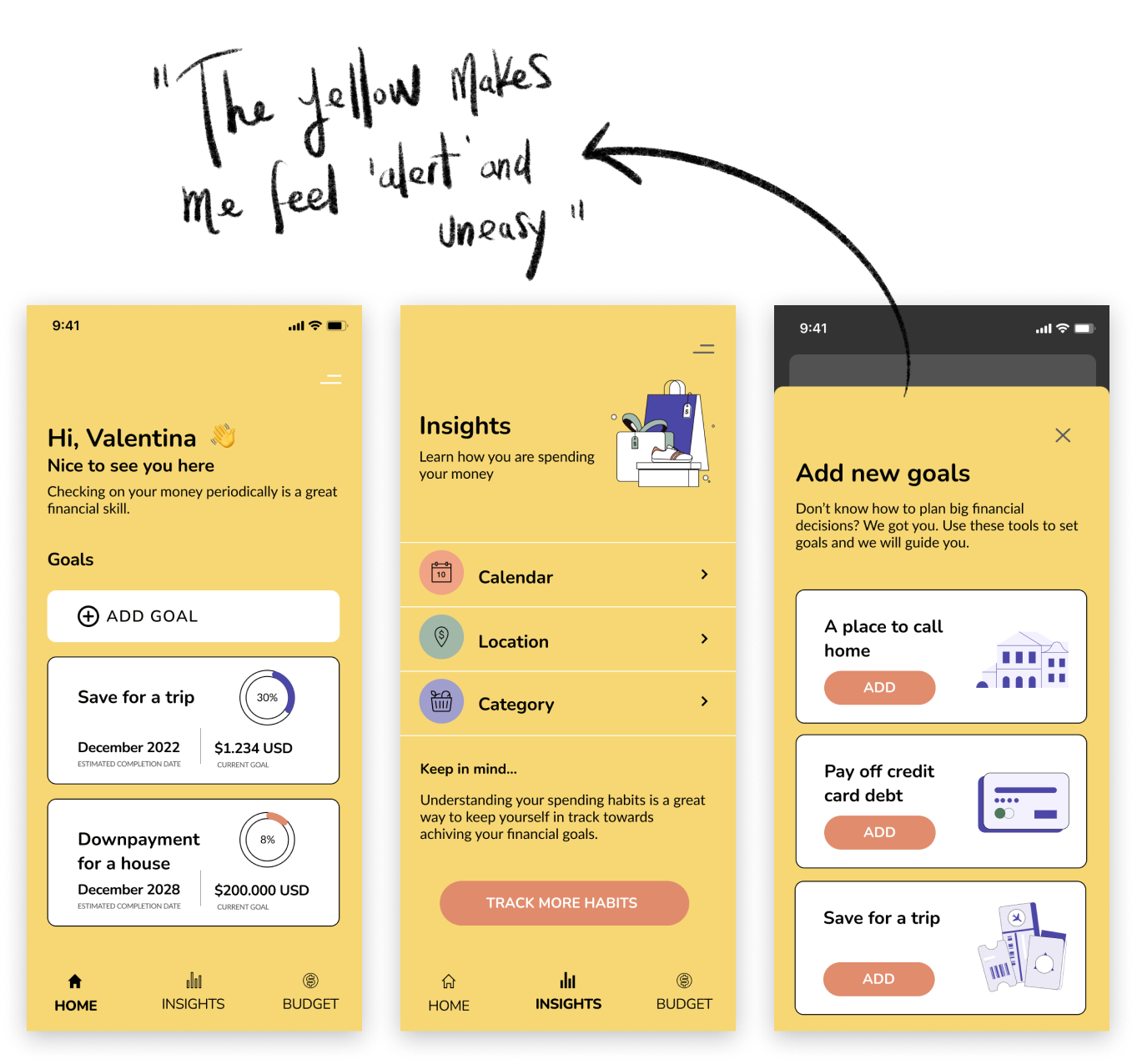 Then I created a prototype to test the user flows defined on the previous stage with Maze, an unmoderated usability testing tool. 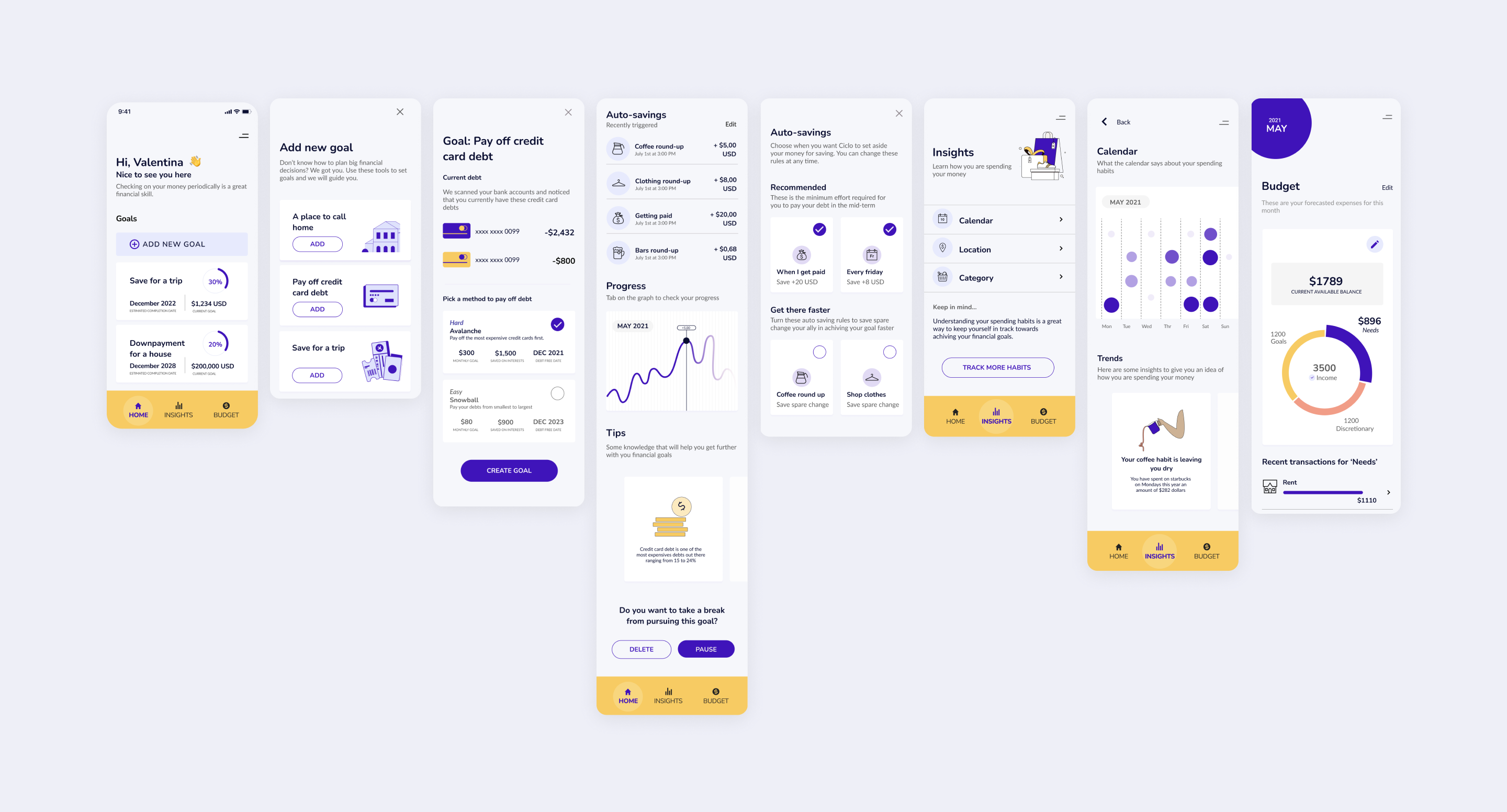 Overall the concept of the app was received with positive comments. There was some feedback in regards to wording and new features that could be improved or incorporated in next iterations.

Case studies are meant to show a happy path but there were a lot of setbacks in coming up with this concept. The project finally took form when I decided to go back to my research and really listen to what my users said the wish existed. And then it was easier to build what they really needed.