Spotify is one of the biggest music streaming platforms in the world.

SEE IT IN ACTION

HOW I GOT THERE

As a streaming music service, Spotify is the group lead and wants to stay that way. For this reason, they want to improve engagement and retention in the app.

An approach to achieve that is to expand on their social capabilities. I was tasked with defining the best way to move forward in that direction.

The way music helps us interact with each other is undeniable. Spotify has already taken steps to enable those interactions through some basic social features such as following artists or friends, and a basic activity feed. However, there’s much more that can be done.

Spotify doesn’t have the ambition of being the next social network where you share your holiday pictures and miscellaneous selfies.

The new functionality needs to be in favor of emotional connection through music. 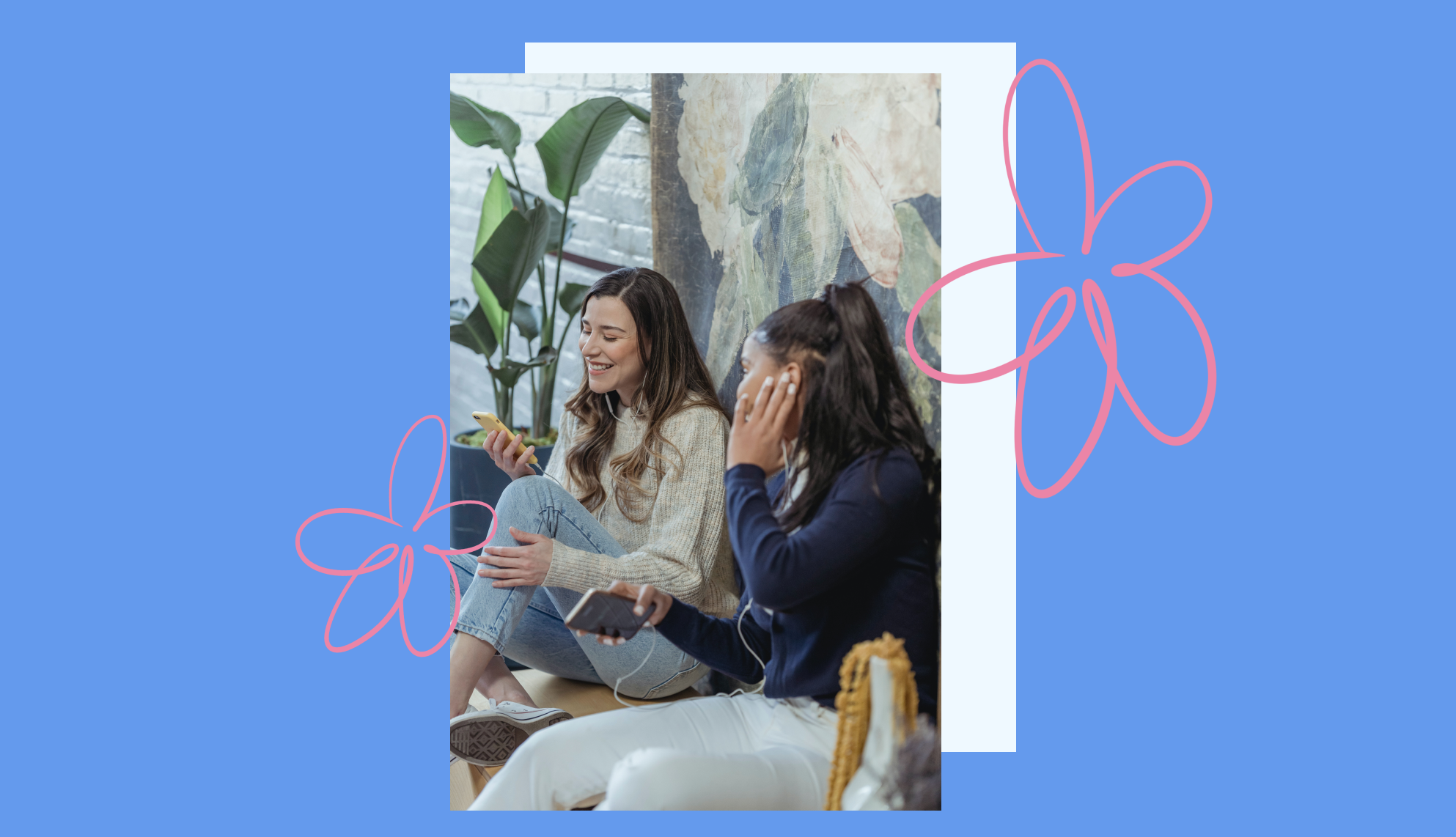 This project was part of the Designlab’s curriculum. I was tasked with researching, prototyping, and testing the feature.

USING RESEARCH TO UNDERSTAND SPOTIFY AND ITS USERS

To kick off my research, I decided to compare different music streaming services in one specific aspect: social features.

I learned that Spotify was the service with the most amount of social features, followed by Apple Music and Youtube Music.

Although I started the process aiming to find industry-standard features that might be lacking, this exercise was helpful to fully understand how Spotify works and map all current features that allow social interactions with other users. 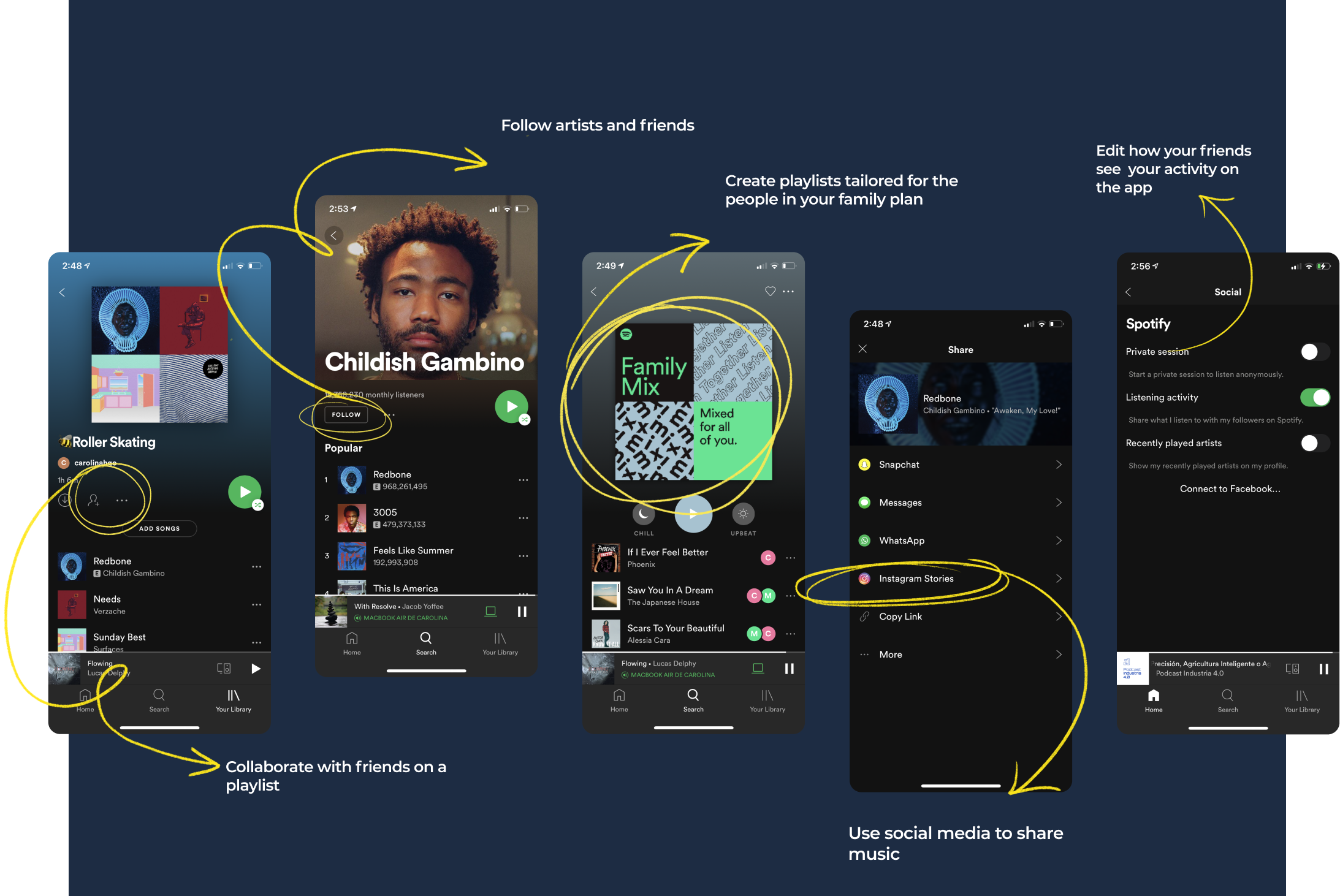 My research approach was to divide it into two sections. The first round was used to discover pain points and friction users experience while sharing and discovering music in general. The second round was used to gather information about those specific sets of pain points.

I interviewed a total of 8 people in 20 to 30 min long interviews. Then recorded the findings into an affinity diagram to find common threads.

1. Users are aware of their friend's musical taste and like taking it into consideration when planning the music for a social gathering.

“When I plan a playlist for a dinner party, I take into account other people’s taste to include songs I think they might enjoy.”

2. Although users are aware of the existence of the collaborative playlist feature, they avoid using it.

“The other day my friends and I were on a road trip. We decided to play music so we tried using the collaborative playlist feature but we thought it was too complicated to use. We defaulted to assigning one person to play the songs on their phone.”

“I felt like the collaborative playlist feature could been better. Some things that annoyed me were that I could only add one song at a time which takes sooo long.”

3. Every one of the interviewees shared their excitement on Spotify’s algorithm to discover new music and get customized recommendations.

TELLING THE STORY OF OUR USERS

I created a storyboard to show our users experiencing the problem space I was interested in, and the context in which they experience it. 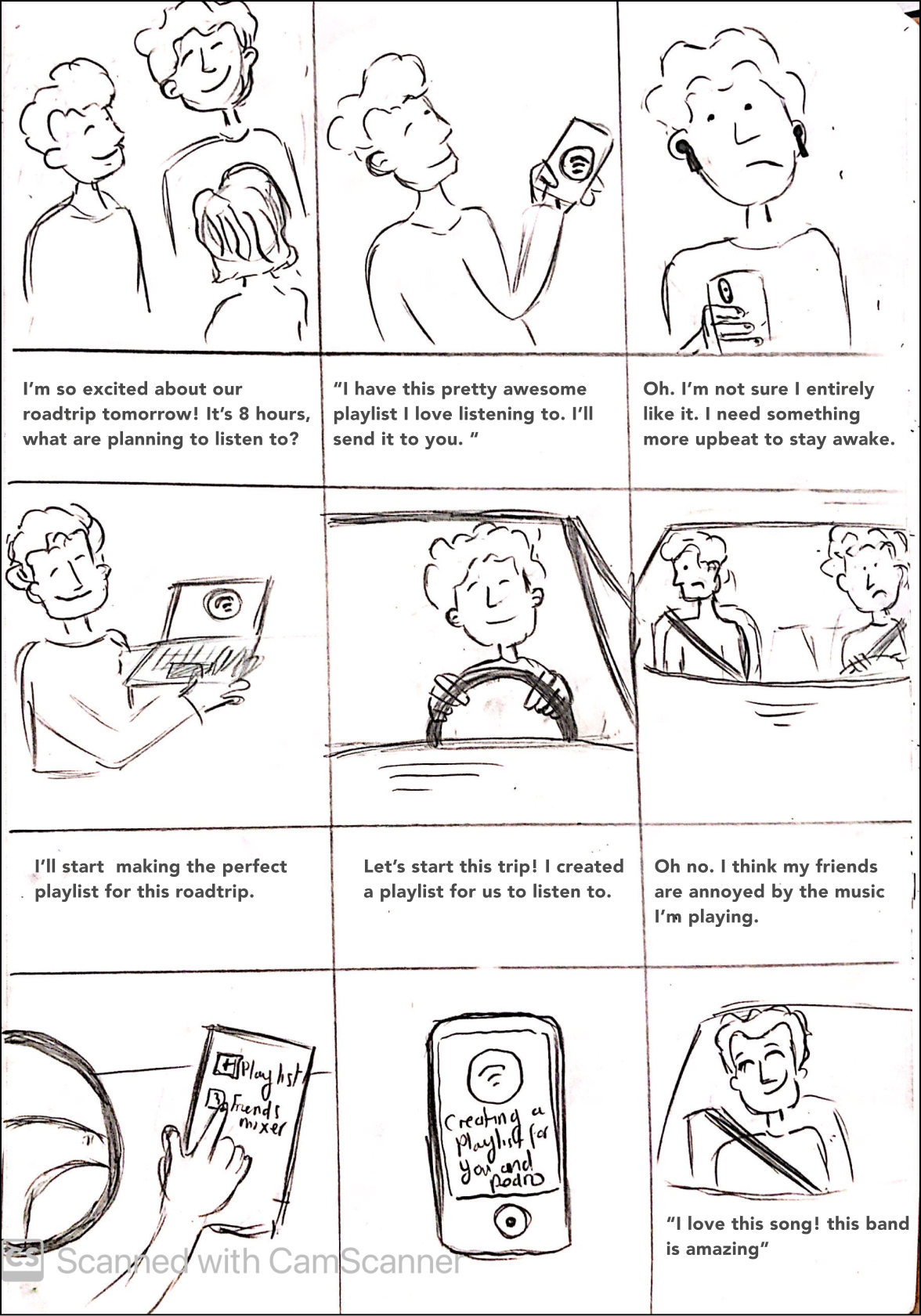 SETTING THE STAGE TO COME UP WITH IDEAS

The insights from research I then translated into user’s needs and point of view, which were then reframed into a how might we question to start coming up with ideas.

HOW MIGHT WE MAKE THE PROCESS OF COLLABORATING IN A PLAYLIST WITH FRIENDS QUICK AND EASY?

I started my ideation process by following a crazy 8’s exercise. By the end of it, I had a strong idea that I decided to pursue.

Spotify curates a playlist for people on your family plan based on everyone’s listening activity. So why not have it create a customized playlist for you and your friends that are nearby? 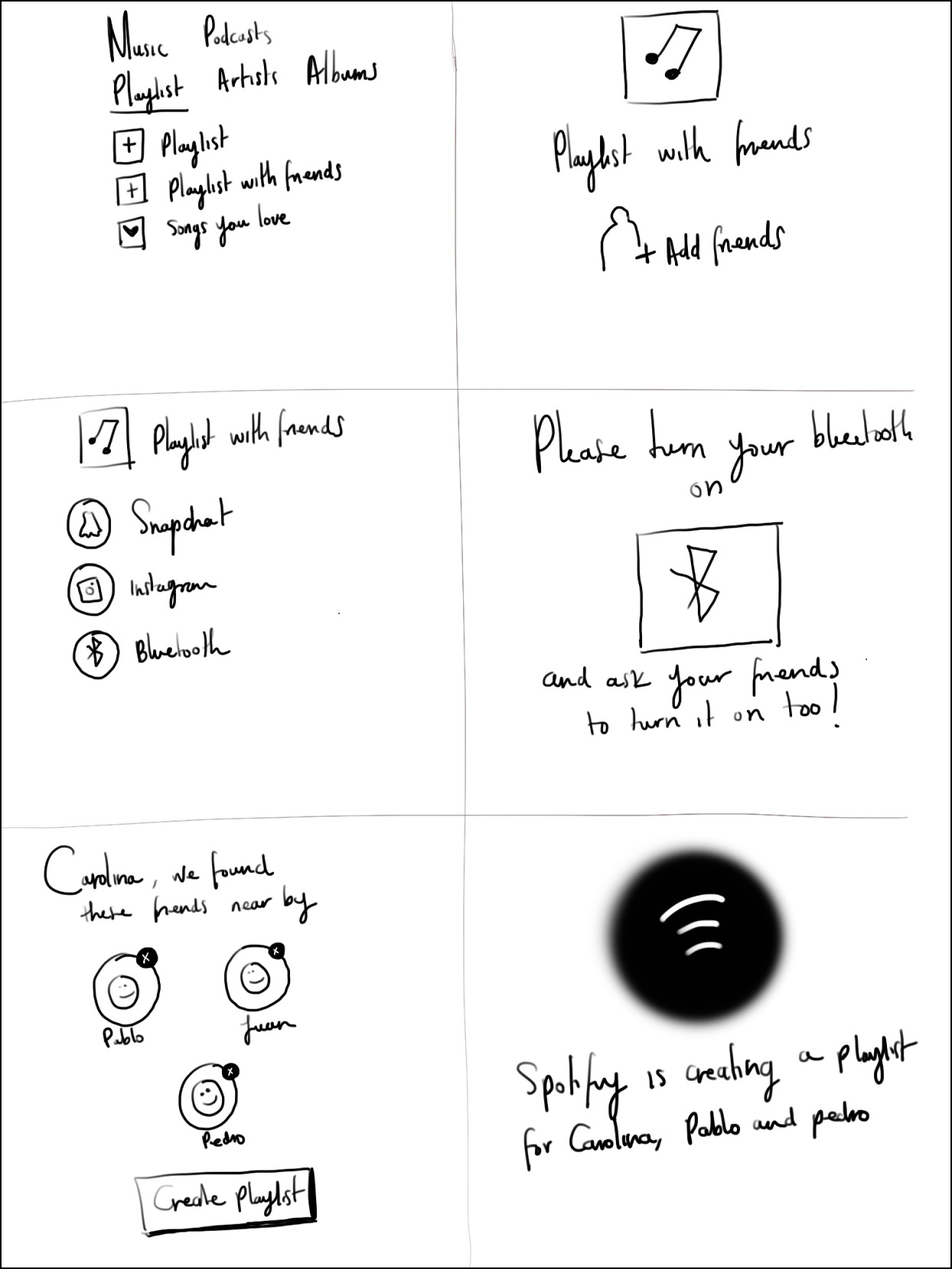 TRANSLATING SKETCHES INTO A PROTOTYPE

And so I decided to build my strong idea into a prototype and test it, but it didn’t perform well.

Using my low-fidelity wireframes, I developed the idea further. Here are some of the design decisions I took that didn’t go well:

I leveraged Spotify’s current user flow for the ‘collaborative playlist feature’ to add the new functionality. But the current flow was hard for people to figure out.

I decided to use the ‘genre playlists’, and the ‘family mix’ filter design patterns from Spotify for the results page, but users thought the mix of the two didn’t make sense. 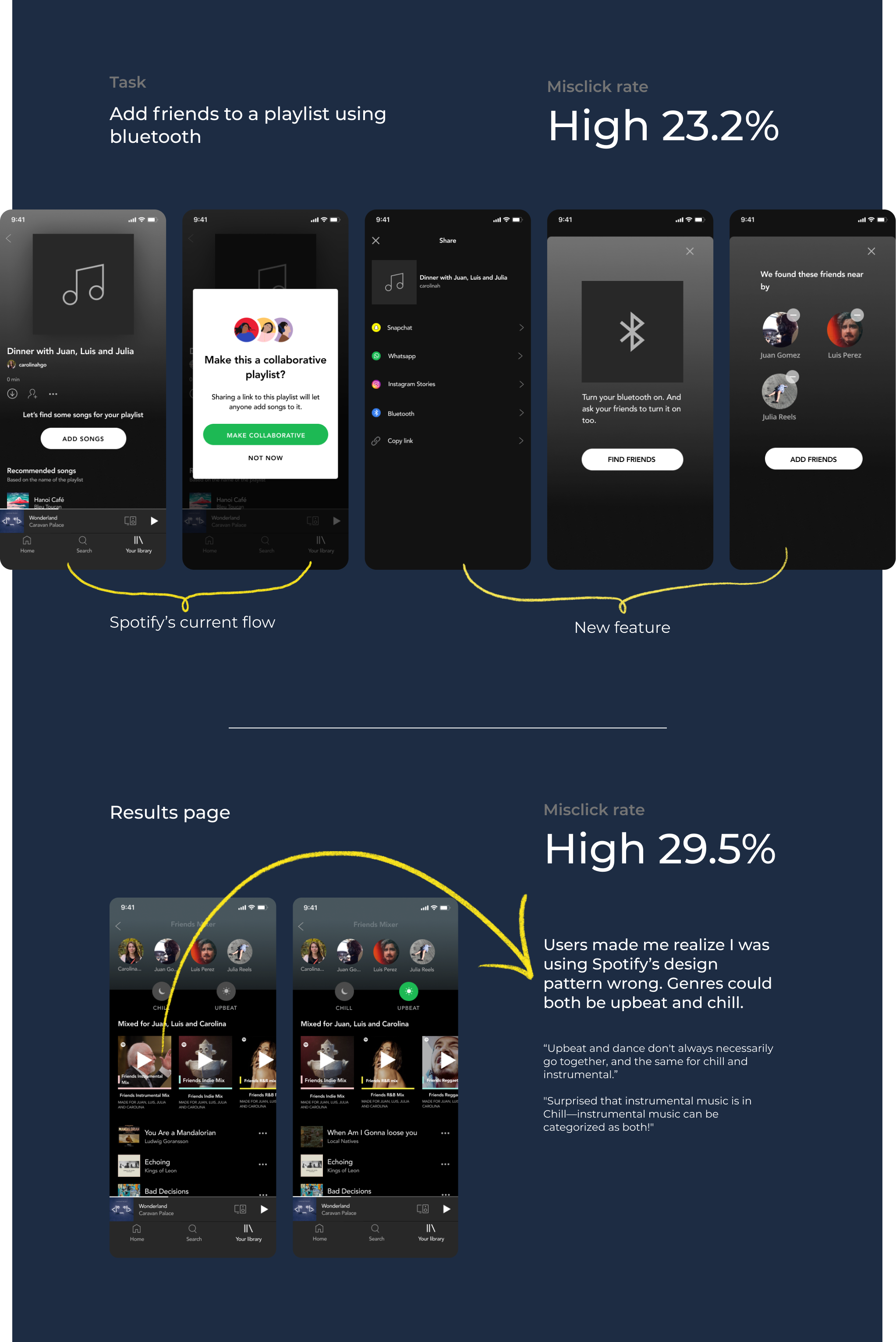 I used the usability testing results to improve on my solution and the results were pretty good! The misclick rate changed from ‘high’ to ‘good’ in all tasks.

This project taught me two main things, the first one was how to approach research with a very open mind. For this project to come together, I needed to trust the design thinking process to reveal the user’s needs.

The second one was the importance of understanding the context under which UI patterns are conceived to make sure I can properly use them in my implementations.